The “redundancy gates” will open without support, the union warns 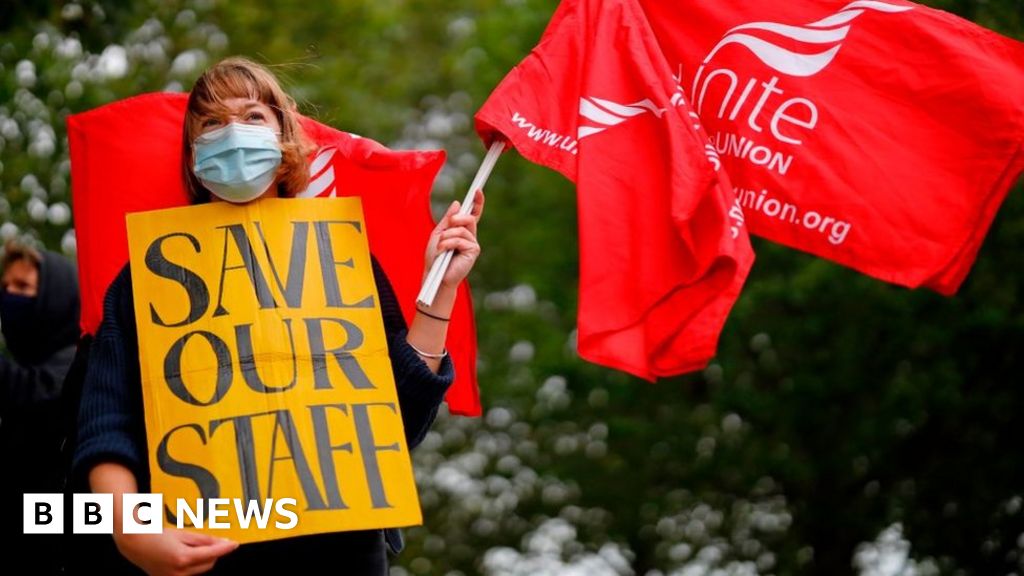 The Unite union has called on the government to say it will extend its progress plan or tackle “redundancy floodgates” in the UK.

Many workers can expect a “miserable Christmas” without specific support for employers, the union warned.

The government program will end on October 31

A Treasury spokesman said the government “did not hesitate to act creatively and effectively to support jobs and we will continue to do so.”

Wednesday marks 45 days before the coronavirus employment retention plan ends, which is the same time employers must give to warn of dismissal.

The call appears amid growing evidence that the liquidation of the plan leads to more plans for job cuts.

The number of companies that notified the government in June of plans to cut 20 or more jobs was five times higher than in the same month last year, figures obtained by the BBC.

A request for freedom of information shows that in June, 1,778 companies said they intended to cut more than 139,000 jobs in England, Wales and Scotland.

In all, nine million people have been studied for at least a three-week period since March,

However, around 695,000 British workers have left the payrolls of British companies since then and it is feared they will continue to do so if the government stops paying to safeguard jobs.

Unite said that without “a clear and urgent signal” from the government responding to calls to expand the scheme, it feared that “employers facing short-term struggles would issue redundancy warnings.”

MPs, business groups, unions and political opponents have urged the government to continue the advance program, in which workers on leave receive 80% of their pay, up to a maximum of £ 2,500 a month.

The scheme, which has cost more than £ 35bn, was initially funded by the government, but companies began contributing to wages in September after it began to be liquidated.

Last week, the Treasury Selection Committee said the government should consider a specific extension of the plan.

UN Secretary-General Len McCluskey said a government signal “would put a strain on struggling employers working hard to stabilize in the face of immense challenges”.

“With our competing countries announcing the extension or modification of their job retention systems, we call on your government to recognize the need for British companies and workers to receive similar support,” McCluskey wrote in a letter to Prime Minister Boris Johnson.

A spokeswoman said Unite wanted to support sectors such as manufacturing, aeronautical infrastructure, aerospace and hospitality.

The government has repeatedly rejected requests to extend the scheme, saying it has served its purpose of cushioning the economy during the coronavirus crisis.

Chancellor Rishi Sunak has said his priority is to find new ways to protect jobs.

A Treasury spokesman said: “The furlough scheme has done what it was designed to do: save jobs and help people get back to work.”

The spokesman said the government made “unprecedented interventions”, including companies receiving £ 1,000 for each worker still working in January, holidays, VAT cuts and the Kickstart plan, which gives experience to the teens.

“Who is our enemy?” Neutral Switzerland votes fighter jets